In the world’s currently, the 435 civilian reactor operates and another 71 are under construction. Of These, around 80% are reactors fuelled by water under pressure, known as Pressure Water Reactor – PWR. Almost all others are water-Boiling Water Reactor – BWR, which also uses plain water for moderation and cooling. A very small number of reactors use other technologies. 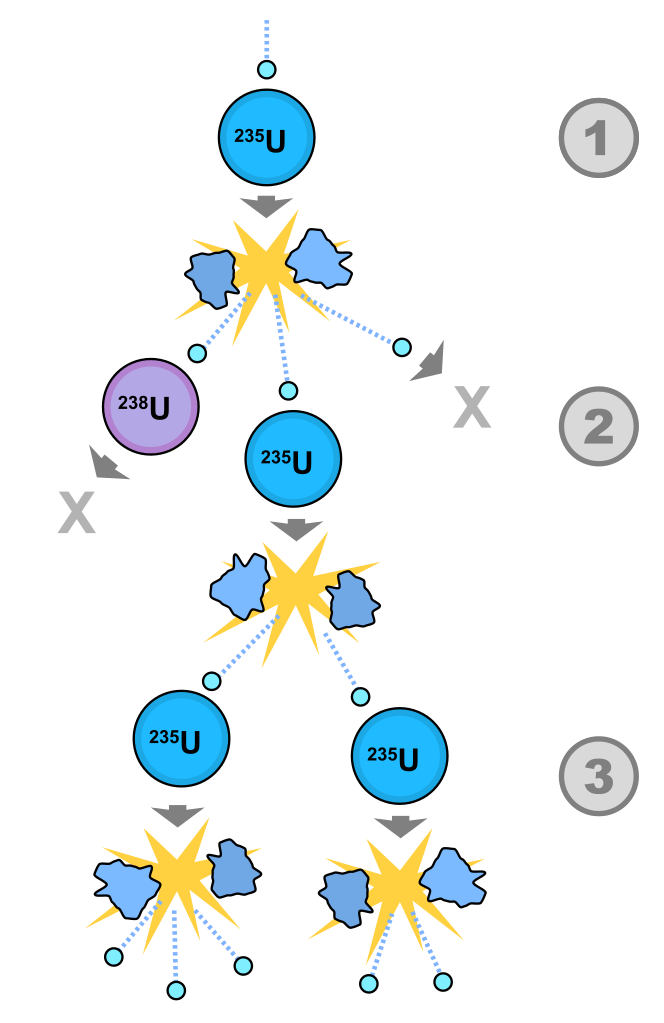 When a free neutron is set off from a heavy-dividing or divisive nucleus, cores of lighter chemical elements are obtained, and in this process new free neutrons are obtained, some of which may also be intercepted by another core of a heavy dividing or divisive element and thus the process to repeat again and again. Of course, there is a probability that neutron generated in nuclear fission does not target another nucleus, or if it is designed not to be intercepted by it, thus these neutrons do not cause further nuclei to decay. If the number of damage caused is smaller than a unit, the nuclear reaction will extinction by itself. In This case we talk about the sub-criticality of the system. If any decay of the nucleus leads to a new decay making the process constant in time, the nuclear reaction is only maintained and in this case we talk about the criticality of the system. Such are the nuclear reactions in the nuclear reactors. If every core decay leads to more than a new decay we will have an exponential increase in the number of degradation, hence the exponential growth of the liberated energy. Such nuclear reactions are called over-critical and represent the essence of nuclear explosions.

As seen, all nuclear reactions are based on the likelihood of the absorption of neutrons by the nuclei of heavy chemical elements. This probability may be altered mainly either by the rate of neutrons or by the concentration of the fissile material. Slow neutrons are more easily caused by nuclear fission, respectively, the presence of more slow neutrons increases the likelihood that the system is critical, that is, we have a chain nuclear reaction. On the other hand, if we increase the concentration of fissionable material, we will also have an increased probability of a chain nuclear reaction. From the point of view of nuclear energy, it was economically more justifiable in its dawn to seek the controllability of the nuclear reaction by increasing the number of slow neutrons in the nuclear reactor core. The ways to achieve this are a few.

The majority of the neutrons obtained in nuclear fission have high energies, that is, they are fast neutrons and the probability of causing a new decay is small. Therefore, in some way these neutrons should be slowed down. This happens when they clash with the nuclei of other chemical elements, which are called “moderators”. Some of the moderators are more effective than others, that is, they slow down faster neutrons. Highly effective moderators are heavy water and graphite. A less effective moderator is the light water. Heavy water, however, is difficult to manufacture, making it relatively economically more inefficient. The graphite in turn has some physico-chemical properties that set certain requirements for the construction materials and the cooler, thus deteriorating the economic parameters of the reactors working with graphite as a moderator. All this has led to the proliferation of water-water reactors – the ones where the water is used for both moderator and cooler.

Water-water reactors (PWR) operating under pressure, water moderated the nuclear reaction and cooled the reactor core in the first loop, as in a separate contour circulates other water, which takes the heat from the water in the first loop and turns to steam in the steam-driven turbine. The temperature of water in the active zone is about 325 C and to prevent boiling, which worsens the quality of the water as a moderator, it is necessary the pressure to be about 150 atmospheres.

In Boiling water Reactors (BWR) we do not have a separate second contour for thermal dissipation from the reactor core. These reactors work with a slightly lower water temperature in the active zone – about 285 C and lower imposition – about 75 atmospheres, allowing the top of the reactor to boil the water and turn it into steam, which is emitted through steam separators and then directs to the steam turbine. The simplified construction of the reactors with boiling water (no two loops, only one) should reduce their cost, but because the water from the reactor has a direct contact with the steam turbine, the electrical generating equipment is required to be radiationally which eliminates their price advantage. 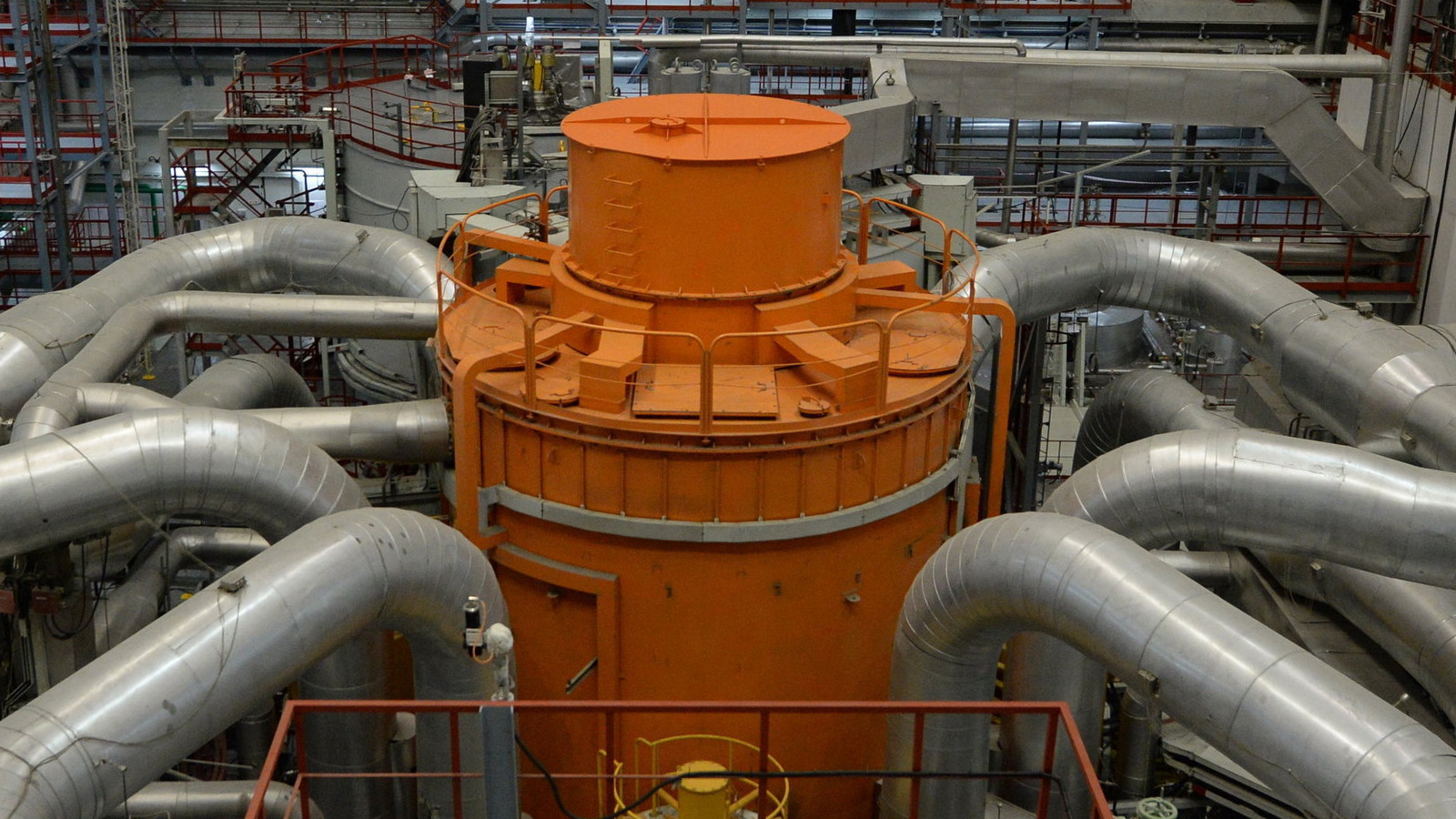 Natural uranium contains about 0.7% U-235 and 99.3% U-238. In each reactor during its operation part of the U-238 component turns into several isotopes of plutonium. Two of them, Pu-239 and Pu-241, then are subjected to fission in the same way as the U-235 in order to produce heat. In Fast Neutron Reactors (FNR), this process can be optimized to “multiply” the fuel. Some U-238 are burned directly with neutron energies above 1 MeV. Therefore, FNR can use uranium around 60 times more efficiently than the normal reactor. However, they are costly to build and operate, and are economically justified only if the uranium prices are relatively high or in order to incinerate the actinides in nuclear waste. FNR has no moderator and relies only on fast neutrons to cause fission, which for uranium is less effective than using slow neutrons. This is why  FNR uses plutonium as the primary fuel as it is saturated fast enough with fast neutrons to continue the nuclear reaction. At the same time, the number of neutrons produced for fission of plutonium-239 is 25% more than in uranium, and this means that there is enough (after losses) not only to maintain the chain reaction, but also to continuously convert U-238 into more Pu-239. In Addition, fast neutrons are more effective than slow, due to the release of more neutrons for fission. These are the reasons for the absence of a moderator. Coolant is a liquid metal (usually sodium) because the metals are very efficient thermal carriers. The fast reactor “Burns” and “multiplies” the dividing plutonium. While the conversion ratio (ratio of new cores to fissile cores) in a normal reactor is around 0.6, this in a quick reactor may exceed 1.0. High enriched uranium (over 20% U-235) can also be used for fuel in FNR.

Initially, FNR were designed to burn uranium more efficiently and thus increase global uranium resources nearly 60 times. Today’s reactors, mainly using U-235, use less than one percent of the potentially available energy in uranium. The opinions that uranium resources are scarce, have led in the early years of nuclear energy several countries to launch extensive FNR development programs. They encountered considerable technical problems, while the geological surveys showed in the 70 that the shortage of uranium would not be a problem for a while. Because of these two factors, in the 80 years of the last century it became clear that FNR for the moment would not be commercially competitive with the existing light water reactors. Progress has been made today in the field of FNR technology, but the economy still depends on the value of Plutonium fuel compared to the price of the fresh Uranium fuel. The international concern about the available quantities of military plutonium led to proposals for the use of FNR for its incineration. The renewed interest in fast reactors is due to their ability to divide the acinids, including those that can be extracted from the spent nuclear fuel. In both respects, technology is important for long-term considerations of global energy sustainability. Nearly all future generation IV reactors will be reactors with fast neutrons. The leading nuclear countries foresee after 2040 all new reactors to be of this type only. Some countries like Russia and China are planning a transition to fast neutron reactors far earlier.