Nuclear Energy is an important economic sector that produces 10% of the world’s electricity and consists of related equipment manufacturers, operators, extractive companies, nuclear fuel producers, research laboratories, financial institutions, regulators and national and international organisations. They operate in different markets and in different institutional frameworks, resulting in a huge variety of factors influencing the price of nuclear energy. Compared to the cost of other types of electricity generation technologies, nuclear power has one of the lowest LCOE. At the same time, in different countries, according to the different capital expenditures and salary levels in the sector, this comparison also leads to serious differences in the LCOE of new nuclear projects. On the other hand, due to the extreme long lifetime of nuclear reactors, there is a significant difference between the cost of nuclear power from a new plant, which has to repay the initial capital expenditures within the first 15 to 20 years of its life from the same plant in the remaining 40 to 45 years when the main factor are only the operating costs. With a view to the competitiveness of new nuclear reactors, the initial capital expenditures for the construction of the plant were of the utmost importance. They also influence the comparison between the LCOE of different energy technologies.

Capital expenditures include the cost of site preparation, construction, production, commissioning and financing of the nuclear power plant. The Construction of a large nuclear reactor takes thousands of workers, huge amounts of steel and concrete, thousands of components and many systems to provide electricity, cooling, ventilation, information, control and communication. In order to compare the different technologies for energy production, the capital costs must be expressed by the plant’s production capacity (e.g. as dollars per kilowatt). Capital expenditures can be calculated when financial costs are included or excluded. If the cost of financing is included, the capital expenditures change significantly in relation to the construction time of the plant, and the interest rates or method of financing. 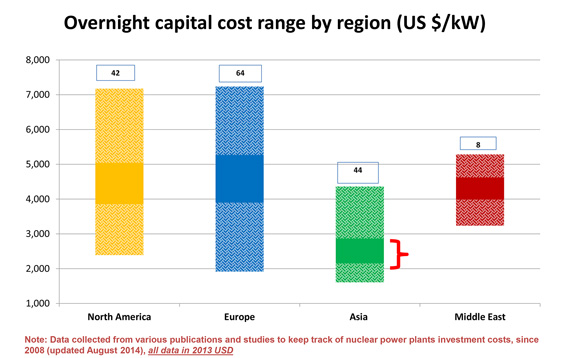 The 2015 IEA-NEA road map of nuclear energy estimates that average overnight costs in China are around $3500/kW and are more than a third lower than those in the EU where they are $5500/kW. The budgets in USA are around 10% lower than in the EU, but still 30% higher than in China and India and 25% above South Korea. In the future, overnight costs in the United states and the European Union are expected to be reduced to some extent, reaching levels close to those in the Republic of Korea, while it is suggested that expenditure in Asia will remain constant. It is Estimated that the construction of two identical 1000 MWe site reactors can result in a 15% reduction in the price per kW compared to that of a single reactor. Some countries, in particular USA, show rising costs over time, other countries show more stable costs over the long term, and reduced costs in certain periods of their technological history. For Example, South Korea experienced a long-lasting reduction in construction costs throughout its history in nuclear energy. The Differences in trends show that the pioneering experience of the USA or even France are not necessarily the best or most appropriate examples in terms of the dynamics of overnight costs in nuclear energy. The dynamics of these costs depend on several different factors. Factors such as the usefulness structure, reactor size, regulatory regime and international cooperation may have a greater effect. 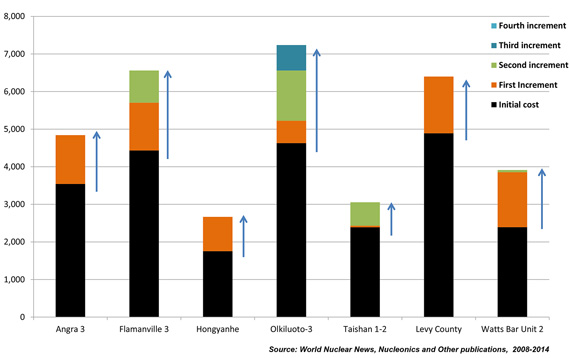 Overnight costs for nuclear power plants in the OECD increased from around $1900/kWe at the end of 90’s to $3850/kWe in 2009. In The 2015 report, the estimated overnight costs range from $2021/kWe in South Korea to $6215/kWe in Hungary. For China two comparable figures are $1807/kWe and $2615/kWe. The U.S. Energy Information Administration (EIA) states that the overnight cost of a nuclear power plant built in USA has increased from $1500/kWe in the early 60’s to $4000/kWe in the mid-70’s (at prices of 2002). The EIA points to increased regulatory requirements (including design changes that require installations to be equipped with modified equipment), licensing issues, problems with project management and incorrect demand assessment as factors contributing to the increase. EIA report from November 2016 gives an estimate of a new nuclear power plant in the U.S. from $5945/kWe. There are also significant differences in capital expenditures by country, especially between emerging industrial economies in East Asia and mature markets in Europe and North America. Variations have different explanations, including: differentiated labour costs; more experience in the rapid construction of reactors; economies of scale in the construction of multiple units;  streamlining of licensing and experience in the management of major civil engineering projects.

The Role of Financial Costs 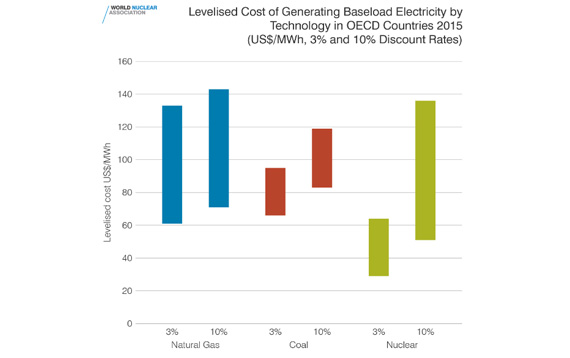 The extension of the time frames for construction, together with the conditions and ways of financing of new nuclear projects, have a significant impact on both the LCOE and the price that the new nuclear power plant can offer on the market at the time of its release into service. The LCOE values at 3% interest range from $29/MWh in Korea to $64/MWh in the Uk, at a 7% interest rate from $40/MWh (Korea) to $101/MWh (UK). The NEA report for 2015 points out that “at 3% interest on capital, nuclear energy has the lowest price for all countries”. However, in line with the fact that nuclear technologies are much more capital-intensive compared to natural gas or coal, the cost of nuclear energy is rising relatively quickly with an increase in the interest rate. As a result, at an interest rate of 7%, the LCOE of nuclear energy is close to that of coal, but lower than natural gas, and at 10% interest the LCOE of nuclear energy is higher than that of natural gas and coal. These values include CO2 costs of $30/t. At the same time, the French nuclear programme has shown that the standardisation of production and the procedures for building new nuclear facilities can significantly reduce overnight costs, which is also reflected in low LCOE. The total cost of building 63 GW nuclear fleet in France was 83 billion €, which achieves overnight costs of €1335/kW, which is significantly lower than the European average today. 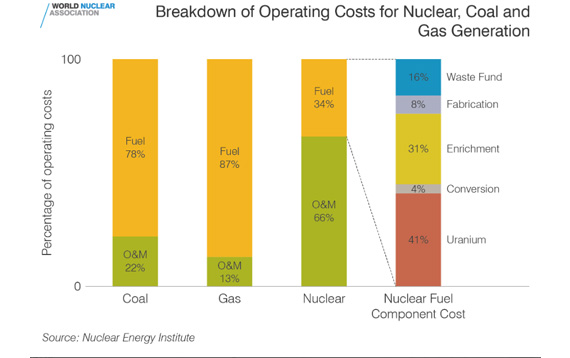 Operating costs include fuel, operation and maintenance costs (O&M). Fuel cost data includes management of fuel used and final waste disposal. Low fuel costs from the outset gave priority to nuclear energy compared to coal and gas stations. However, Uranium must be treated, enriched and incorporated into fuel elements, accounting for about half of the total fuel costs. The assessment of the economy of nuclear energy must also take into account the management of the radioactive fuel used and the final disposal of the fuel used or the waste emitted by it.

The Cost of decommissioning is around 9-15% of the initial capital expenditures of the nuclear power plant. In the USA they amount to 0.1-0.2 cents/kWh, which is no more than 5% of the price of the electricity produced.

The Storage and/or long-term deposit of SNF shall contribute up to 10% of the total cost per kWh, or even less, if there is direct deposition of SNF, rather than processing into MOX fuel. The SNF management program used in the USA is financed from a fee of 0.1 cent/kWh. But even with these included, the total fuel costs of the OECD nuclear power plant are typically around one-third to one-half of those for a coal plant and between one quarter and one fifth of those for a combined gas cycle. The American Institute for Nuclear Energy assumes that the cost of fuel for a coal plant is 78% of the total cost, for the gas plant this figure is 87%, and for nuclear uranium is about 14% (or 34% if included are all management and waste costs).

System costs are external to the installation and operation of any power plant, but must be paid by the consumer in electricity, usually as part of the cost of transmission and distribution. Each new power plant usually needs changes in the network and therefore leads to significant power costs to be accounted for. But these costs for large base load installations are usually small compared to the integration of variable renewable energy sources into the grid. For nuclear and fossil fuel plants, the system costs relate mainly to the need for a reserve capacity to cover intermittent interruptions, whether planned or unscheduled. The systemic costs associated with the production of renewable sources relate to their inability to produce electricity without the necessary meteorological conditions and their scattered locations distant from the consumption centres. Network system costs for intermittent renewable energy sources are large ($ 15-80/MWh) but depend on country, context and technology (wind offshore or onshore, solar). The systemic cost of nuclear power is $1-3/MWh. Although relatively small, these costs must also be taken into account when assessing the various nuclear projects. For Example, the lower system costs of new power in Kozloduy NPP is one of the major advantages of the Project. 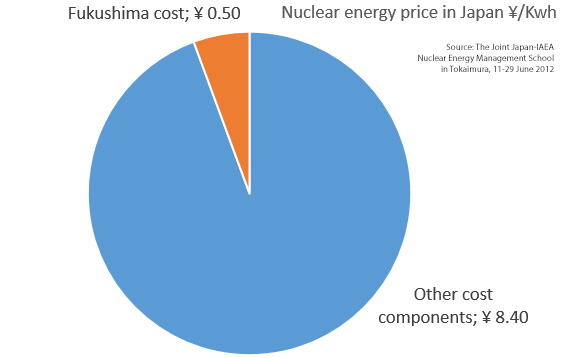 Study commissioned by the European Commission in 2014 and conducted by the consultancy firm Ecofys, calculates the external costs of nuclear energy as 18-22 EUR/MWh, including about €5/MWh for health effects, €4/MWh for accidents and €12/MWh for the so-called “depletion of resources” related to “the cost to the public of the consumption of limited combustion resources now and not in the future”. At the same time, the cost of depletion of resources is difficult to calculate, as the scarcity of a limited natural resource is already reflected in its market price and can therefore be accepted as zero. Another Report on the European Commission, made by Professor William D’Asselere of the University of Leuven, in November 2013, estimates that the cost of a potential nuclear accident will be in the range of 0.3-3 €/MWh.

The economic impact of nuclear accidents is of particular importance to society. According to the estimates of the Japanese Atomic Energy Commission (JAEC), the damage from the Fukushima accident will be reflected as 0.5 yen ($0.004) from every kilowatt-hour produced by nuclear reactors in Japan in the next 40 years.